This brief was prepared by the Harlem Historical Society and the Washington Street Advocacy Group on April 16, 2021. On Tuesday, April 20, 2021, the Waterfront, Parks & Cultural Committee of Community Board 1 in Lower Manhattan debated the Downtown Alliance's proposal to rewrite the signs and replace the stanchions for the "Heritage Trails New York" project of the 1990s.

Taina Prado and Natalie Armstrong gave a presentation on the plans. The Washington Street Advocacy Group and the Harlem Historical Society had written and distributed the below brief of 10 reasons to rethink the plan.

After a debate, the committee decided to reject the plan with conditions, which were listed before the vote.

1. The Heritage Trail(s) legacy is flawed and needs to be reconsidered fundamentally.

The Heritage Trail in Lower Manhattan began with 16 signs for the patriotic bicentennial celebrations in 1976, and these signs were reenvisioned and expanded in the 1990s as part of a larger “Heritage Trails New York” project by the J.M. Kaplan Fund that ultimately failed to find sustained financial support. As a result, its color-coded trails were never completed, and many of the signs have been torn down in the years since. The Downtown Alliance’s own materials suggest that only between 22 and 26 signs of the 40 signs remain, and they only plan to update the still-standing signs, which no longer even function as part of coherent trails.

Rather than devote resources to install near-identical physical structures and update the arbitrary signs that survived the unfinished project, an appropriate Task Force should reevaluate whether new signs should be added and whether the existing signs should be rethought comprehensively. Failure to reconsider the Heritage Trail(s) fundamentally contradicts the Downtown Alliance’s own stated “inclusivity” goals because truly inclusive input would question the trail’s entire organization and premises. The current plan promises no new framing and no new signs related to slavery, civil rights, immigration, indigenous people, activism, or labor history.

2. The Downtown Alliance did no public outreach, despite its “inclusivity” goal.

Historical signs on city streets should come from a decision-making process that incorporates substantial public input. Yet, the Downtown Alliance and the Department of Transportation did absolutely no public outreach, and they did not even inform Community Board 1 at the start of their process to rework these historical signs. The recent Black Lives Matter protests brought significant attention to history and memorialization, so it was especially inappropriate to advance this important initiative without including broader voices.

This insulated-organizational approach cuts against the stated inclusivity goals because a public process would have encouraged diverse voices outside the Downtown Alliance to opine. As a result, even though the Alliance is asking the Community Board and the Public Design Commission to approve the project without seeing the full texts and design elements, we believe the signs are certainly inadequate and ignore important considerations. The Community Board would certainly be within its jurisdictional purview to table this proposal pending the submission of the complete details.

3. The vetting, by only one unnamed historian, is inadequate and opaque.

The Downtown Alliance’s message to Community Board 1 states that the organization is vetting the signage text with a single, unnamed historian at the Museum of the City of New York. This is absolutely inadequate. The history of Lower Manhattan is complex and no single expert could vet all of these signs to the extent the long-term commitment requires. Additionally, while historians don’t necessarily need to write all signs that face the public, they should be involved in the drafting phase, not only in the vetting. Historical accuracy in the language placed on public signage is critically important for education and citizenship.

Instead, a well-considered historical signage project for Lower Manhattan, arguably the most important single area in American history, would begin with a diverse collection of leading experts and historians, as well as community voices. Academics and local historians should be involved at the beginning of the project, not at its end.

4. The Downtown Alliance branding is too prominent.

If we are honest about the design of the new signs, we can see at first glance that the primary purpose is to promote the new corporate branding of the Downtown Alliance, which is already blanketing Lower Manhattan on trash cans, tables, chairs, vehicles, kiosks, and advertisements. This is even explicit in the Alliance’s statement to Community Board 1. The large, red stripe at the top of the new sign design communicates nothing about the history of New York City and serves only to match the new branding of the Downtown Alliance. The fonts also appear to match the Downtown Alliance’s minimalistic corporate logo rather than having been chosen to enhance the readability of signage, or to connect to New York City’s historical aesthetic.

Since the previous signs lasted nearly 25 years, the branding of a new signage project should be intrinsic to the signage itself, with a design likely to survive changes of taste, and not be linked to corporate branding that will be updated more frequently. While it is appropriate to have a small logo of the Alliance, as exists on some of the current signs, it is inappropriate to make the Downtown Alliance’s logo the central motif for the signs in their entirety.

Additionally, while the previous design acknowledged Heritage Trails New York and the other agencies and institutions involved, the current sign design only contains the Alliance’s logo and gives the impression that the Downtown Alliance was the only institution responsible. This design disrespectfully obliterates the quality input of previous collaborators.

At the same time that the Downtown Alliance is proposing to update all historical signage, legislation for a Freedom Trail Task Force (Intro. 293) is advancing through the City Council. Co-sponsored by Chairperson Jimmy Van Bramer, the bill was unanimously approved by the Cultural Affairs committee in a hearing held on February 18, 2021. Long advocated by grassroots organizations, Community Board 1 endorsed the concept unanimously with a resolution on March 27, 2012. The Freedom Trail would include sites “associated with the Abolitionist Movement and Underground Railroad.”

Most of the proposed Freedom Trail sites are in Lower Manhattan. It might be appropriate to have a parallel Task Force that works on all historical signage comprehensively while the Freedom Trail Task Force undertakes its work. The Downtown Alliance proposal is shortsighted because of the tremendous implications and potentials that the Freedom Trail project entails.

6. New historical signs should not be determined solely by corporate interests.

While the Downtown Alliance may maintain the current signs at present (although many have suffered arbitrary removal), they should not have the sole authority to determine the subjects and texts of the signs. Without impugning the organization in any way, we should acknowledge that the organization was founded by the historically-significant Rockefeller family and that its board is composed significantly of leaders in banking and real estate. Many of the historical stories that new, “inclusive” signage needs to consider may conflict with the stories that the Downtown Alliance’s membership would prefer to tell (including at locations near their own real estate properties). The Downtown Alliance should be only one of a collection of voices that determines the content of these signs on public land.

7. There is no improvement to wayfinding.

While the most severe criticisms of this project relate to the signage, the wayfinding system does not seem to offer any improvements. Again, it seems to favor installing the new Downtown Alliance branding over practicality. Both the fonts and the directional arrows appear less legible than the previous signs. Also, apparently in the interest of removing colors and elements that do not match the Alliance’s branding, they removed the photographs of key locations, which assist tourists who cannot read English or who have bad eyesight.

For years, the Downtown Alliance stated that the reason it could not entertain changes to its existing historical signs was because it was waiting for a new, comprehensive wayfinding system developed by DOT, which has now been installed in recent years. However, this proposal does not seem to be grounded in DOT’s accessibility design principles, but rather the Alliance’s own branding.

8. “Downtown” is not preferable to “Lower Manhattan”

On at least some signs, the Downtown Alliance appears to change the title “Exploring Lower Manhattan” to “Explore Downtown.” While “Downtown” may be appropriate for the Business Improvement District, it is inappropriate for the breadth of history these signs must engage. The geographical term “Lower Manhattan” does not relate to a specific vision for business from the 1950s and 60s, and it does not exist only in modern comparisons to “Uptown” or “Midtown Manhattan.” When discussing history in the oldest colonial section of the city, we should attempt to avoid such fraught labels as much as possible. While new, comprehensive signage might avoid using “Lower Manhattan” as well, there is no good reason to accept this change on the existing signs.

Additionally, this proposal appears to incentivize the Downtown Alliance to only update or be involved with signage within their Business Improvement District, which excludes key areas that were part of the earlier Heritage Trails New York project like the South Street Seaport, the Civic Center, Newspaper Row, and the Brooklyn Bridge. The earlier project also included a key site of “inclusivity,” the African Burial Ground, it appears this proposal does not include.

In general, the historical signage of Lower Manhattan should be determined by the need to tell compelling and appropriate stories, not by the boundaries of any Business Improvement District. Even if such responsibility is customary in other BIDs, the extremely significant history of Lower Manhattan cannot be confined for arbitrary reasons related to the geographic boundaries of a BID. The trail boundaries should be determined by experts and by the actual dynamics of tourist flows.

9. Publicly-funded educational centers should be involved.

New York City has a number of publicly-funded academic centers with great expertise that should contribute to a new signage project, including the Schomburg Center for Research in Black Culture and the City University of New York’s Gotham Center for New York City History and the American Social History Project. Given that these entities are supported by public funds, the City should place them on any Task Force that establishes a new historical signage project for Lower Manhattan.

10. This plan will not promote tourism, but an alternative could significantly.

Finally, the economic environment necessitates creative thinking about generating tourism through excitement and new reasons to visit. Local authorities should plan a bold strategy that encourages people to come to Lower Manhattan and experience it in a new light. Just as the Freedom Trail in Boston and the Constitutional Trail in Philadelphia are successfully attracting millions of visitors, New York City has a great opportunity. Such a project must be done creatively, thoughtfully, boldly, and inclusively. Instead, the proposed plan is unimaginative, exclusionary, and limited.

Rather than send the message that Lower Manhattan is an exciting place that is newly confronting its complex history, the project sends the message that Lower Manhattan is defined by its Business Improvement District, which presents a conservative historical perspective. Let all stakeholders, including the public and Community Board 1, sit down and plan how we can tell all sides of the great stories of the establishment, the growth, and the people of New York City. 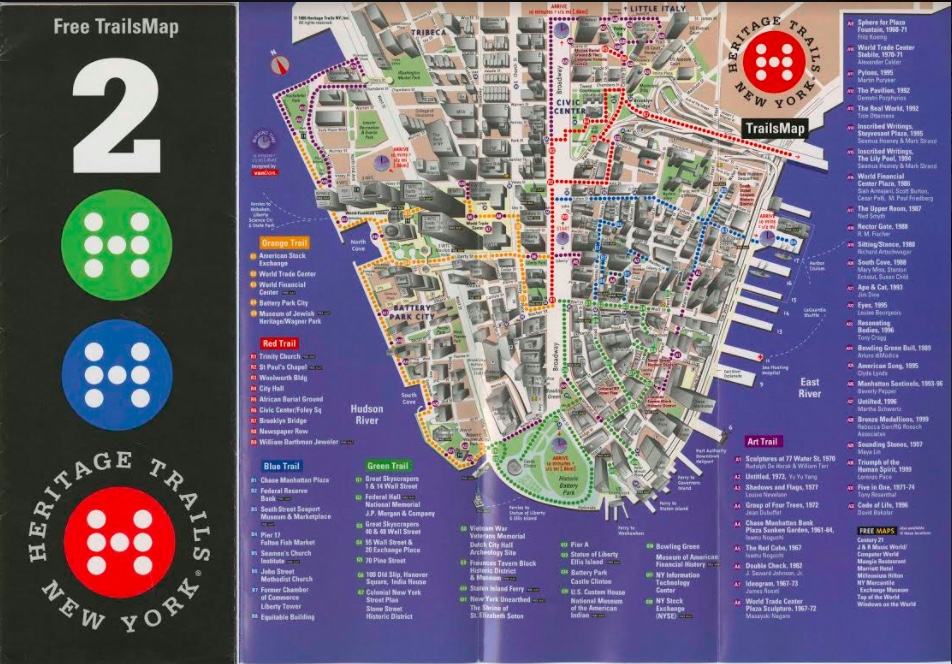 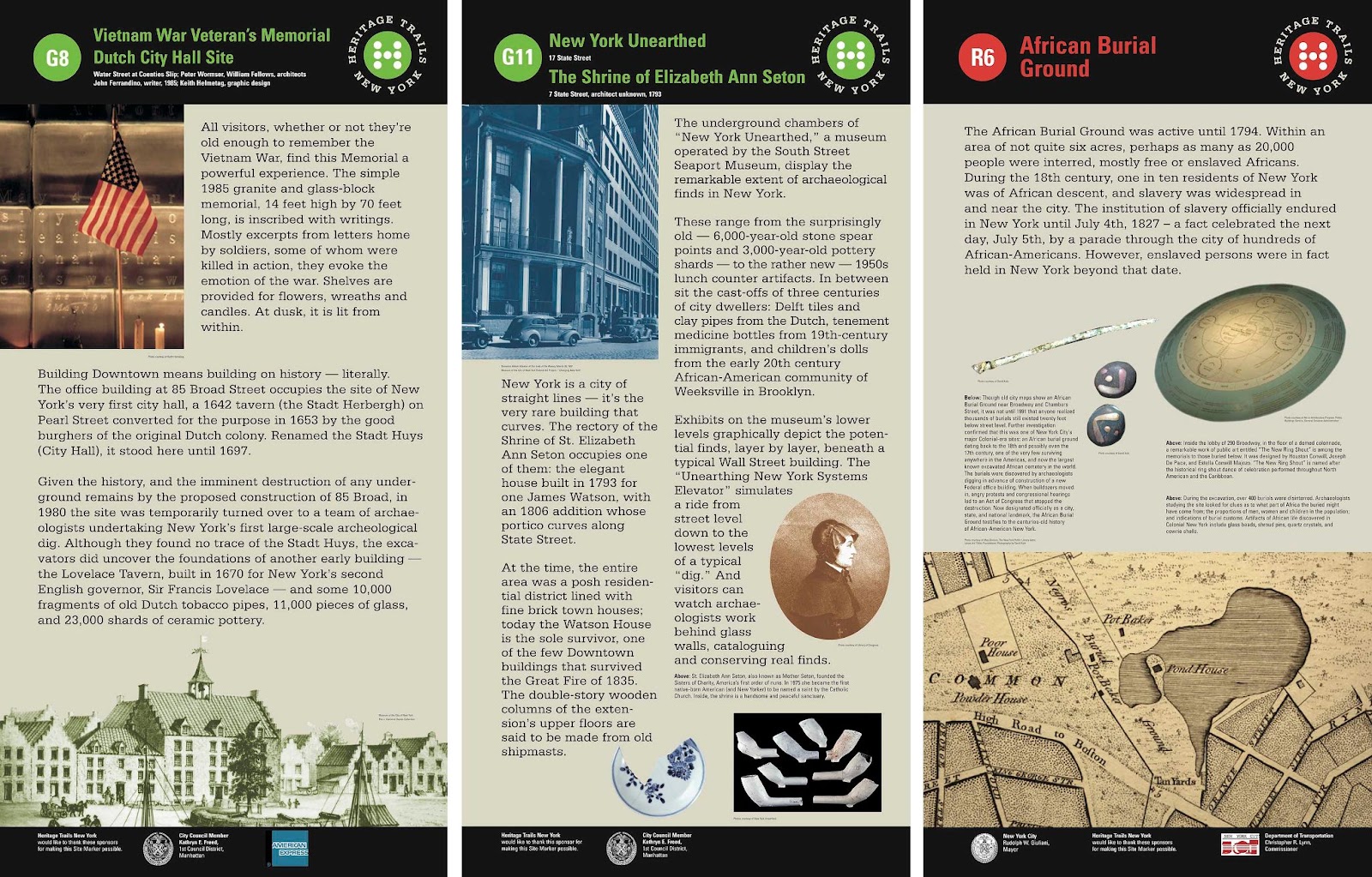 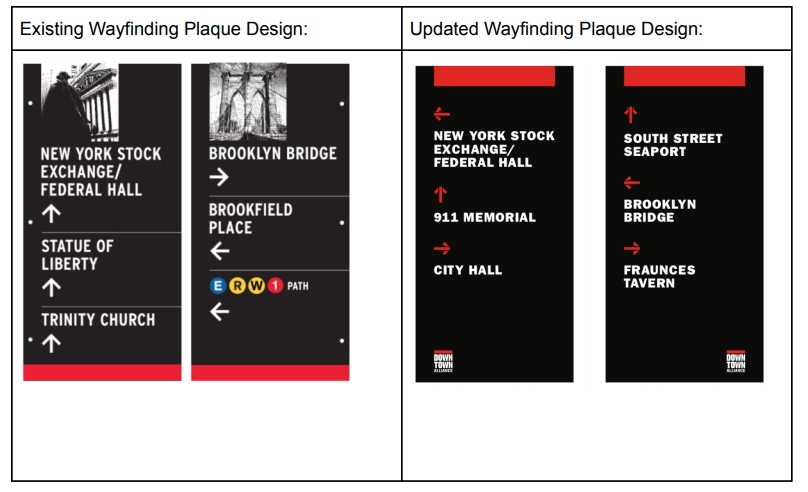